Perhaps the endgame has always been the scripting or directing of a feature film of our own. Absurdist thinking? We think not! Especially now in the digital era of film making, almost anyone can make a film, anyplace at anytime. But while we are waiting, our skills in production and post production can be utilized on any film set around the world. Whether it’s as an assistant producer organizing pre-production demands, in a technical production capacity on set, or cutting and splicing the final product – Conceptually Speaking Designs has the skills you need. 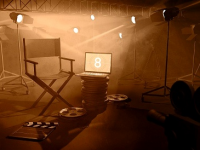